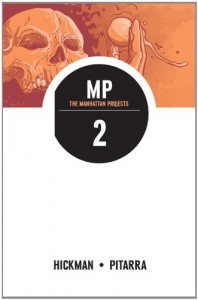 So far, my favorite comic of all time. Yes, it might get eclipsed at some future date, but for now, wow, you can't get any better. This volume puts the focus on Helmutt Grottrup, German rocket scientist and general whipping boy for whatever regime happens to be in power. I'm waiting for the day he finally cracks and punches his bullies on the jaw. We are also introduced to the cabal that rules the world (I'm not kidding) and the Manhattan Projects members struggles with them. Yuri Gagarin plays a more direct role in events and proves himself a hero. The space dog, Laika, also plays a significant role in keeping Nebehu, master of magics and one of the ruling cabal, at bay. Finally, we are re-introduced to Joseph Oppenheimer's increasingly-fragmented reality, which has arisen because of his murder and subsequent cannibalistic consumption of his brother, Robert.

I'm wondering where Hickman goes from here? I can see a few possibilities, such as the potential for Grottrup to get fed up and not take any crap anymore, as I've mentioned above. JFK is now in the picture and the space race is heating up (though the real space race has already been run). And then there's the question of how to keep FDR: AI dead? I think he might be coming back for a second round. But let's hope not.

The fun established in volume 1 just keeps on going. If you're in for some extra-dimensional insanity involving the smartest men who ever lived, this is your cup of tea. Sip it, if you can. I couldn't help but gulp it down and make a slob of myself.