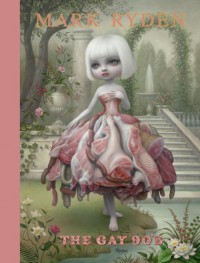 I am an unabashed fan of Pop Surrealism (aka "Low Brow") art.Ryden is one of the most prolific and high-profile artists of the movement. His self-admitted goal in producing the work represented in The Gay 90's is to "pull the lowest of the low into the highest of the high" by reinterpreting the kitsch representations of the 1890's (most of which were actually realized in the 1920's) as surreal-renaissance-style paintings. There is a sense of the solemn, even the divine, in the paintings themselves, but with such a twisted absurdity as to be transgressive. The painting "The Parlor" is a good representation of Ryden's aesthetic, showing porcelain-skinned Victorian girls in a parlor featuring a curiosity cabinet (carefully-planned in every detail by Ryden, as evinced by a pre-painting sketch), a tuxedoed and top-hatted Death holding a tarot card, and a gigantic eye set atop an antiqued wooden post. The center of attention is an infant (the Christ? Difficult to say, though Ryden has representations of Christ throughout the rest of the book) holding a clock-cum-image-of-eternity - a swirling snail-shell clock surrounded by symbols from the Zodiac, along with a series of Chinese symbols (that, alas, I cannot interpret). Near the eye, a nude goddess figure sits atop an overly cheerful creature somewhere between a lamb, a polar bear, and a poodle. This mixture of a sacred mood overlaying a ridiculously kitsch menagerie of figures, is emblematic of Ryden's work.

Ryden's work can be found all over online, but this book is worth owning because of the many preliminary sketches, which show the evolution of Ryden's thoughts in the very act of creation, and because of the outstanding introductory essay, "Mark Ryden and the Transfiguration of Kitsch" by Amanda Erlanson. These provide an excellent introduction to Ryden, his work, and his place among the contemporary luminaries of Pop Surrealism.