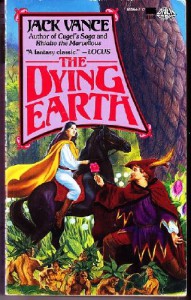 Let's do some quick math. Jack Vance's The Dying Earth was originally published in 1950. I was born in 1969. I first started playing Dungeons and Dragons, in earnest, in 1979. It is now 2014. On second thought, screw the math. You can plainly see that my reading of The Dying Earth is tardy, given that Gary Gygax and Dave Arneson cited Vance's work as influences on the development of the Dungeons and Dragons game.

More than an influencer, The Dying Earth is a wholesale supplier of D&D wares. In the first story, "Turjan of Mir," we see something akin to alignment, the fact that wizards must memorize their spells from spellbooks, the limitation (which I always thought was a rule to add game balance - I was wrong) that mages can only memorize so many spells a day, and at least one spell that was almost lifted verbatim from Vance to Gygax and Arneson (the Excellent Prismatic Spray, which appears in D&D as "Prismatic Spray," unless it is cast by one of the wizardsBill or Ted, in which case it is the "Most Excellent Prismatic Spray, Dude").

Now, that's not to say that The Dying Earth is one long hack-and-slash D&D adventure. Far from it. Vance is a far more sophisticated writer than Gygax or even Arneson (who, in my humble opinion, is the better of the two - compare Arneson's wrting on his Blackmoor campaign with that of Gygax'sGreyhawk campaign setting. Gygax had more stuff, Arneson had better original writing). So don't go in expecting a Choose Your Own Adventure. Vance is choosing the adventure for you, and his characters and their quests are meant to be read, not played. These characters, in these situations, would crumble in the hands of a lesser artist (like the 12 year old me that would have tried to create D&D stats for these characters and sent them on a killing spree through a non-descripts dungeon crawl).

I will admit that the first couple of stories were a bit trite. The thin plot devices and moralistic tales read more like a poorly-copied fairy tale than a good work of fantasy. I'd love to know the order these stories were written in, as they got better as the book progressed. By the end, they were outstanding.

The second-to-last story in the book, "Ulan Dhor," follows the journey of the titular novice sorcerer in his quest for the lost city Ampridatvir, once ruled by Rogol Domedonfors, a wizard of great power. Ulan Dhor is sent there by his mentor, Kandive, to recover the lost magic of Rogol Domedonfors by bringing together two tablets which, when combined, will restore the magical power that once held sway in the city. Along the way, he encounters a strange culture and even stranger magic - the magic of the ancients that once held sway before the sun began its slow death. One can see that this story might have influenced M. John Harrison's Viriconium or Jeffrey Ford's Well-built City.

The final, longest, and most compelling story, "Guyal of Sfere," follows another adventurer on a quest to find the Museum of Man to speak with the Curator, from whom Guyal wishes to gain knowledge. Again, the seeker travels into strange lands, encountering strange customs and cultures, in a story that is, at first, less about the magic (though magic does play a part) and more about the men and women Guyal meets in his journey. Only when Guyal and his new travelling companion, Shierl, make their way into the Museum of Man does magic play a major role. And this is strange, strange magic, of the kind that would fascinate nerds like me for decades to come. There is a hint of absurdism in the tale, which reinforces the bizarre feel of the story. Suffice it to say that we encounter one of the most disconcerting demons I have ever had the dis-pleasure of reading about - which is saying something, given my . . . particular . . . reading tastes. I could see this story influencing Gene Wolf's Book of the New Sun and, to some extent, Book of the Long Sun, which could make for some compelling historical analysis (of which I am not capable).

What started out as a not-particularly-spectacular read ended up as something excellent. I will be reading more of Vance's work, not because it's assigned reading for a class in Dungeons and Dragons history (for which I was really tardy), but because the writing in the last half of the book was excellent, the characters less shallow than much of modern fantasy, and the strangeness endearing to this strange reader.