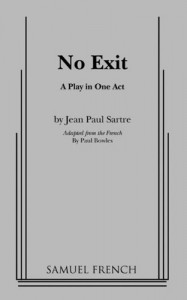 As a function of pure entertainment, Sartre's No Exit is brilliant. Ironically, Sartre uses almost-pure dialogue to "show not tell" the dilemma faced by Garcin, Inez, and Estelle, three "absentees" (a euphemism for "the dead") locked into a room, condemned to be together for eternity. Each has arrived here for different reasons, but all three possess qualities that bring out the worst in the others. Rather than the traditional hellish tropes of horned demons and hell-fire, this play evokes more special tortures - the ability to see into the world of the living only long enough to know what other living beings are saying about you since you've been "absent," the pressure of having three personalities who delight in interfering with each potential pairing (and the promise of solace that might mean), and the exquisite pains of honest self-doubt.

I had hoped to take this as a "primary source" of Sartre's philosophy, but perhaps I've got it all backwards. I am familiar with the tenets of existentialism that Sartre espoused, but the philosophical gloss that is given in No Exit seems to be as much a veneer as a core underpinning.

That said, one need not think too hard to realize that this is an excruciatingly uncomfortable examination of human nature in all its banality. The characters at once seem likable, or at least their character flaws seem excusable, initially. As the play goes on, though, we begin to see each person's flaws magnified, as with a glass, until the full impact of their crimes and selfishness are realized. Soon, the audience feels shame for having excused or even liked the absentees, with a full realization that any of them (the audience, that is) could be seen as Garcin, Inez, or Estelle, or possibly even a conglomeration of any two or all three.