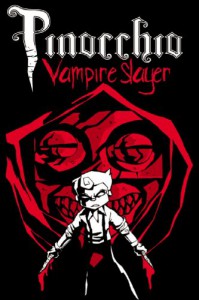 I soured on vampires before vampires were cool, back in the early '90s. But how could I resist picking this up? The premise is amazing, even if you're not a vampire-phile.

The art is wonderful, with a razor-edged Disney feel. The characters were good, but I didn't find myself too vested in any of them. Pinocchio himself has a lot of potential, though, and I'd like to see what is done with him in future volumes. There is a touch of post-modern angst throughout, which could be milked to good effect. What happens when he hits puberty, I wonder? Do I really want to know? In all seriousness, I found Pinocchio to be clever in this work, and I mean that without condemnation. He is an intelligent dark hero, using his lies and the truth to his best advantage. I appreciated this aspect of the book best of all.

My biggest problem with this book had to be the ending. The plot was good throughout, a little rushed here and there, as I've come to expect with most graphic novels, but the ending. Hopefully "Empire Strikes Back" doesn't spoil it too much for you . . .

So if you're really into vampires and puppets and feel like you're in a forgiving mood, or at least one that will allow you to enjoy a derivative plot thread, go for it. If not, I'm not gonna lie to you, you probably won't like it.

There, see? My nose didn't grow at all.